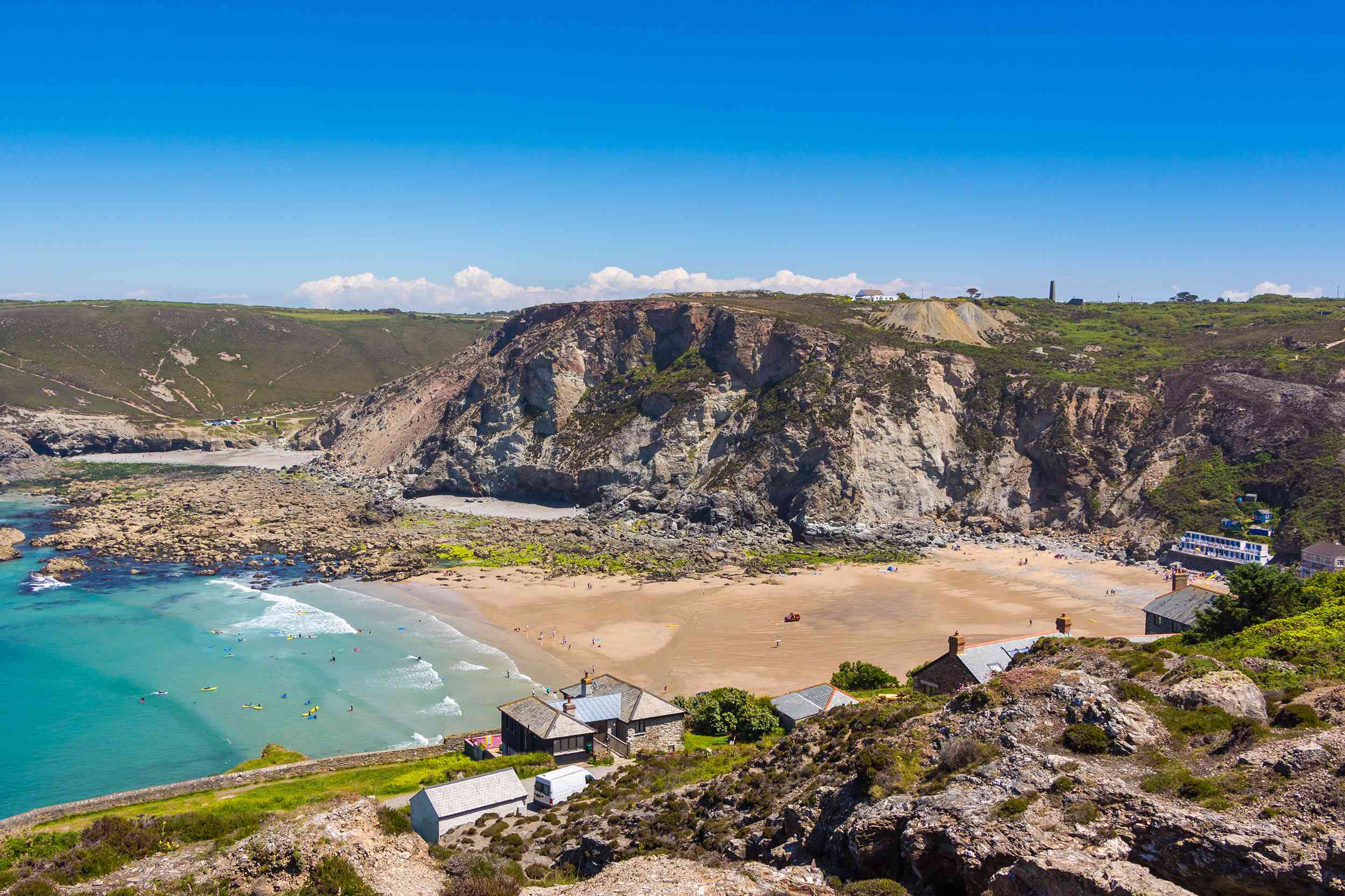 In a place steeped in history, you would expect a cottage to be characterful and charming, so we have handpicked just the one for you, which is also within easy driving distance of The Eden Project and Truro.
Although conveniently set in the heart of the village, privacy and seclusion are yours. Local amenities are on your doorstep. The beach, a mere stroll away, is a great place to watch a spectacularly romantic Cornish sunset.
If you adore a touch of bespoke luxury with wonderful coastal walks, this is the place for you, for a beautiful replenishing holiday retreat. 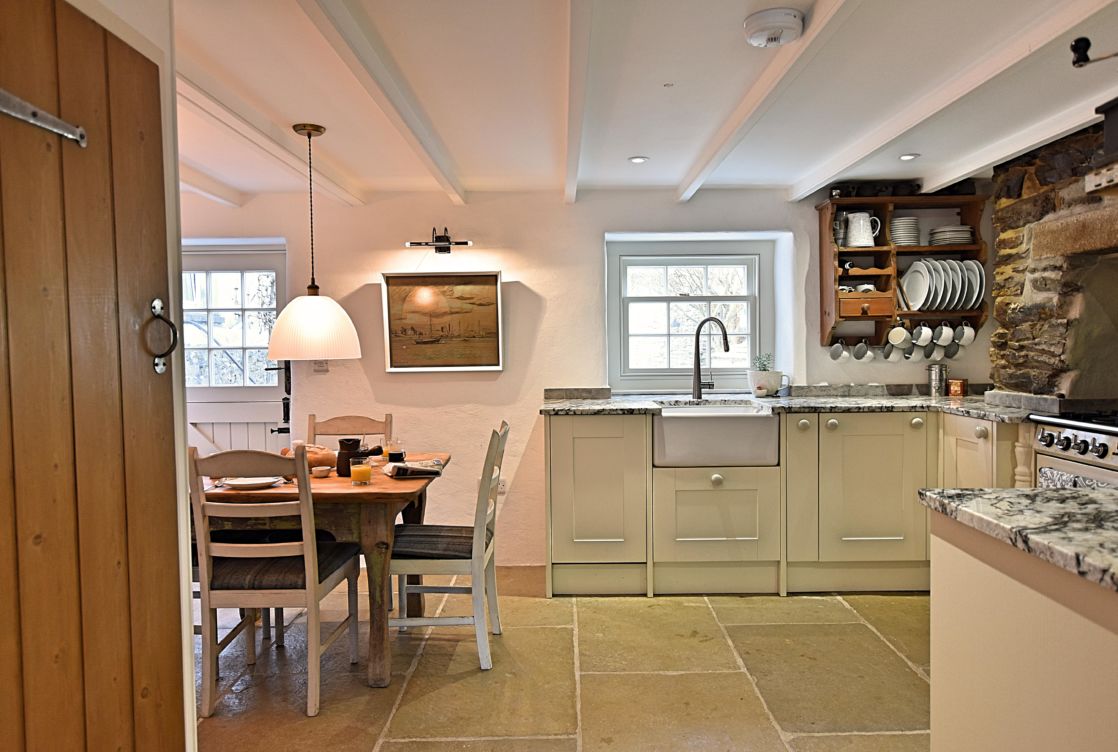 The ONLY holiday guide need when visiting St Agnes.

If you love Poldark, you will recognise St Agnes, adorning the gloriously historical Heritage Coast, which featured in Winston Graham’s original novels and in the popular TV series starring Aidan Turner in the lead role.

Perhaps best known for its row of ‘Stippy-Stappy’ houses up-along a short lane from Trevaunance Cove, the 200-year-old higgledy-piggledy sea-captains’ cottages define the village, the essence of rural Cornwall.

The village got its name from the local legend of Bolster the Giant, who terrified villagers and, legend has it, ate small children. However, he fell in love with the beautiful Agnes who asked him to prove his love for her by filling a hole in the rocks in Chapel Porth with his blood. Agnes was a clever girl, brighter than Bolster. The hole she chose ran right down the cliffs and into the sea, so Bolster the Giant bled to death – and fair Agnes became a heroine.

‘Aggie’, as it is known to the locals, is in a designated Area of Outstanding Natural Beauty. It is popular with people who love the rugged landscape and mining heritage. St Agnes Head is a brilliant place to spot dolphins. 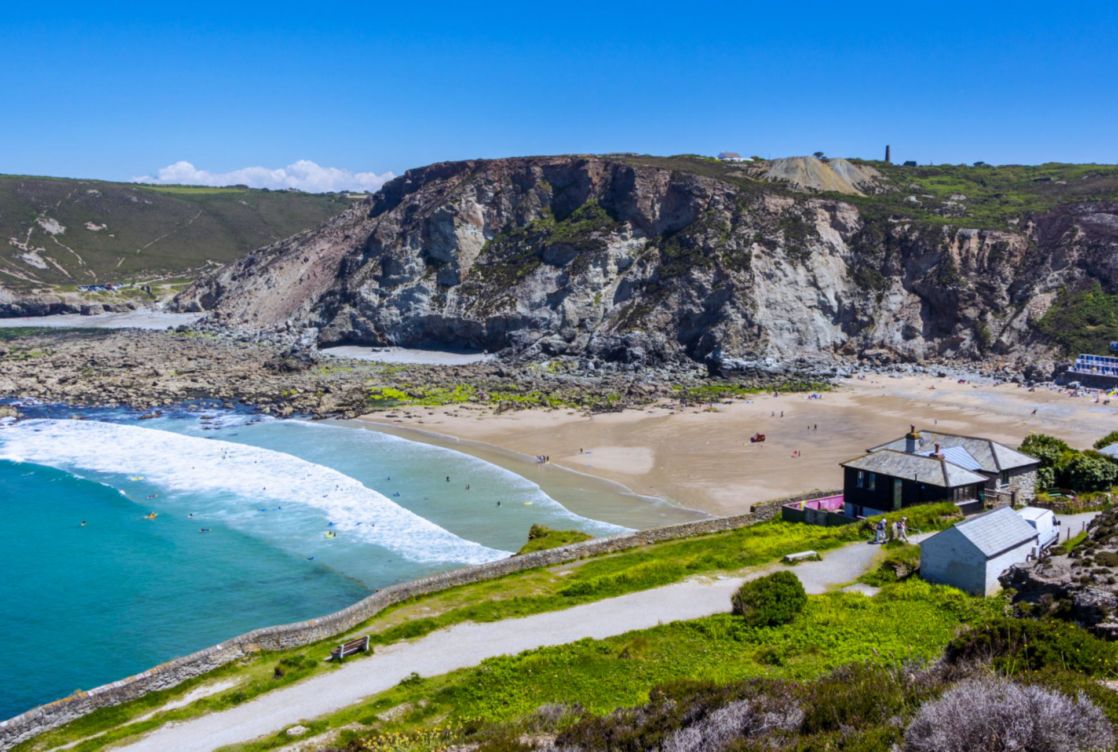 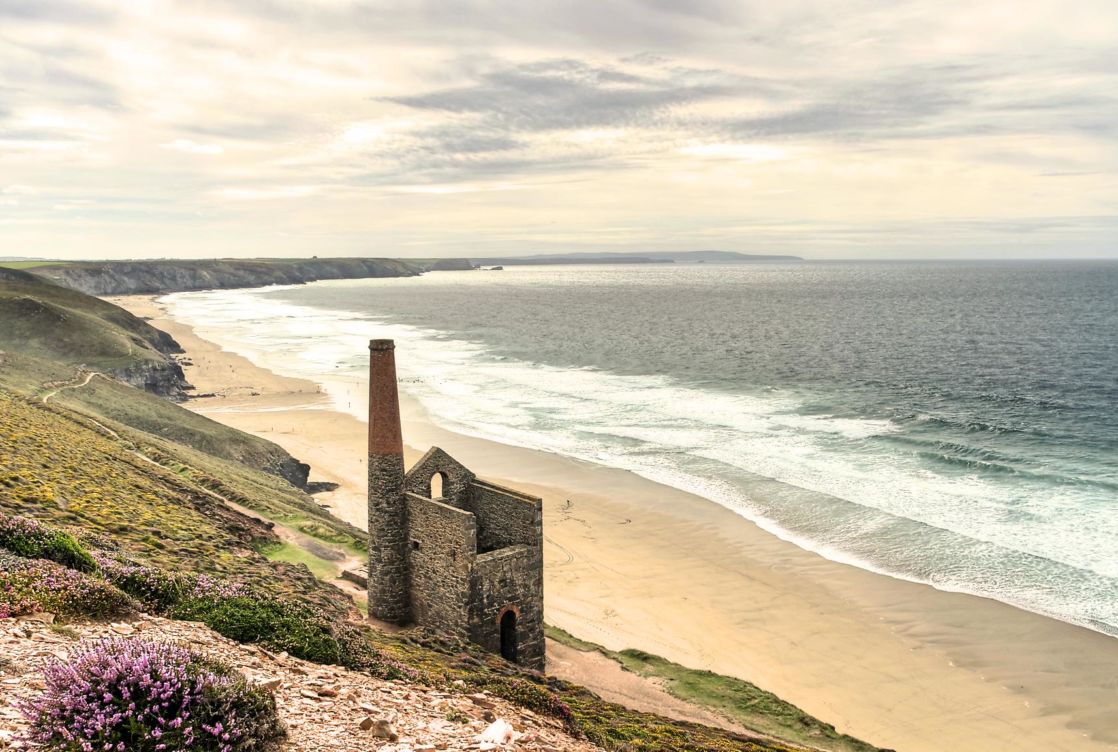 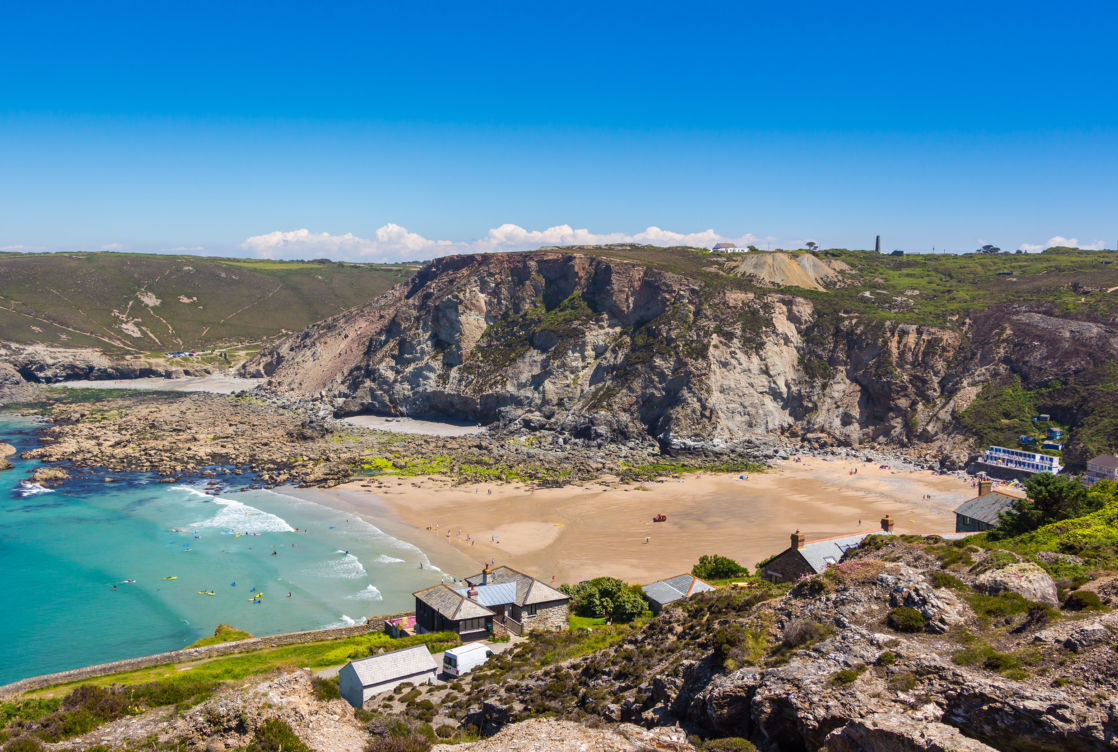 Getting to St Agnes is fairly straightforward. From London, you just take the M4 then the M5, and finally the A30. An alternative route is the A303 if there are hold ups on the M5, as this also takes you to the A30. It is 10 miles south-west of Newquay.

Check out St Agnes village car park on Trelawny Road, or Rappers Coombe car park, which is a good spot to park to get to the pub and the secluded beach; or finally, the Trevellas Cove car park, a small National Trust car park with space for 10 to 12 cars.

There are a variety of eating places including the friendly Miners Arms restaurant, which has also been a court, a smugglers’ lair and even a house of ill-repute. So, step back in time and try some traditional food in this historic setting.

Alternatively, Taste restaurant is a wonderful lunch spot, with lots of fish and meat dishes on the menu, plus some veggie options.

Schooners is a casual stop serving Cornish small and large plates, plus cocktails and beers. It is a popular beach-front restaurant with open-fire cooking and smoky flavours.

The Tap House is a funky venue with live music and an array of draft beers and gins. Daily changing food menus make the most of fresh produce. Genki is a tiny place serving unpretentious fresh local ingredients during the season. 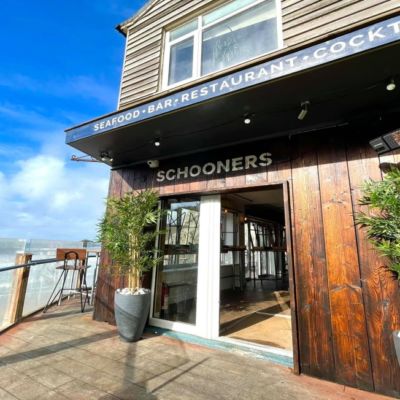 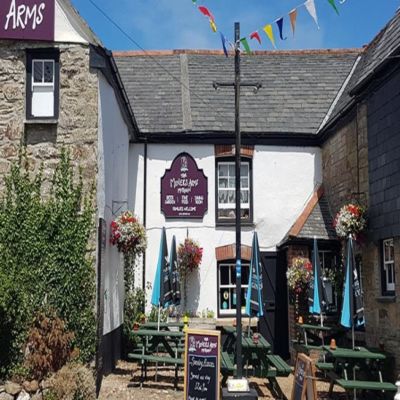 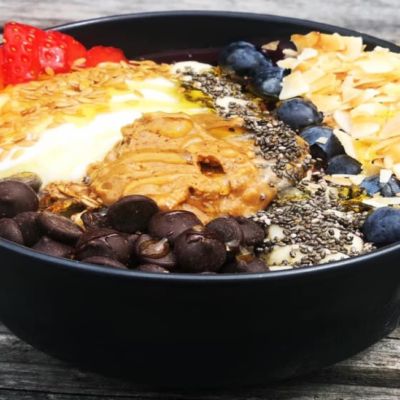 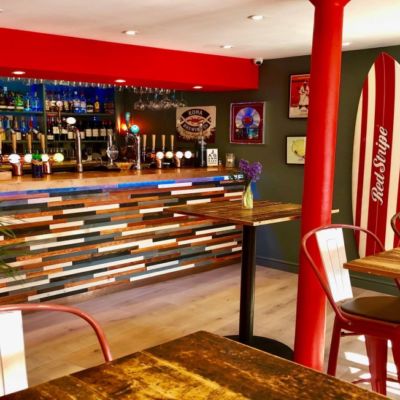 Meanwhile, the kids will love artisan pizza with a Cornish twist (fresh, local and authentic) at the Cornish Pizza Company. 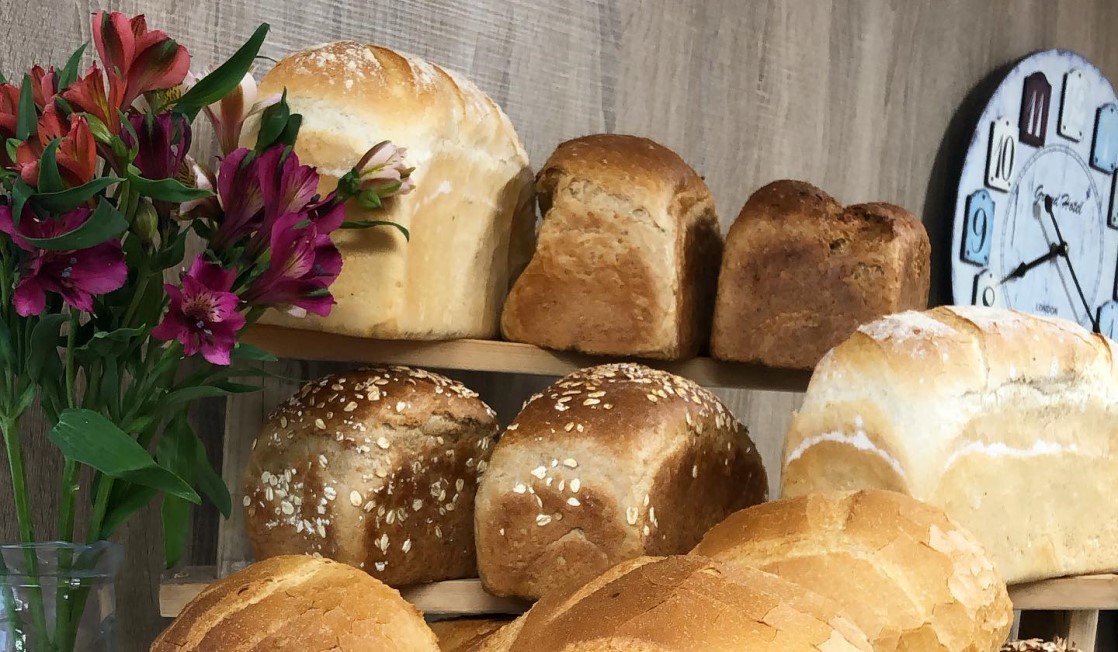 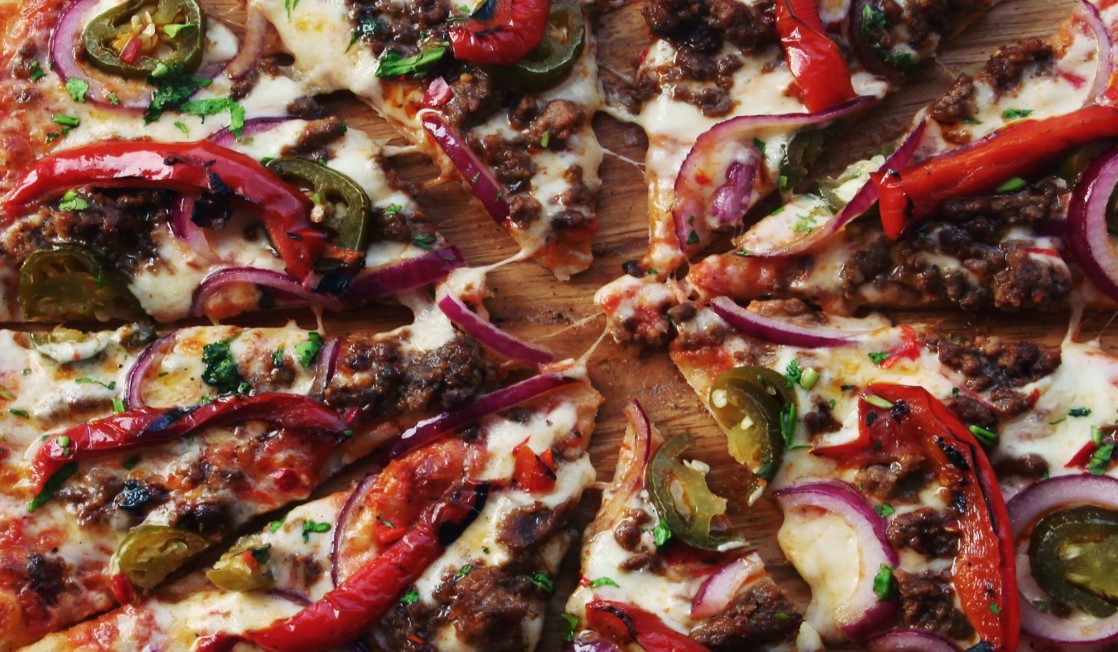 View the beaches and the coastline from a different angle with a trip out with Koru Kayaks – you will pass under high cliffs and maybe even enter sea caves (some formed by the miners), so enjoy a little taste of life on the ocean wave and see if you can spot a friendly seal along the way.

Why not enjoy a family paddleboard (SUP) session with SUP in a Bag?

The beaches are a brilliant draw for children. You can also find out more about rock pooling here.

Rather different, look out for a pop-up Start to Stitch session. 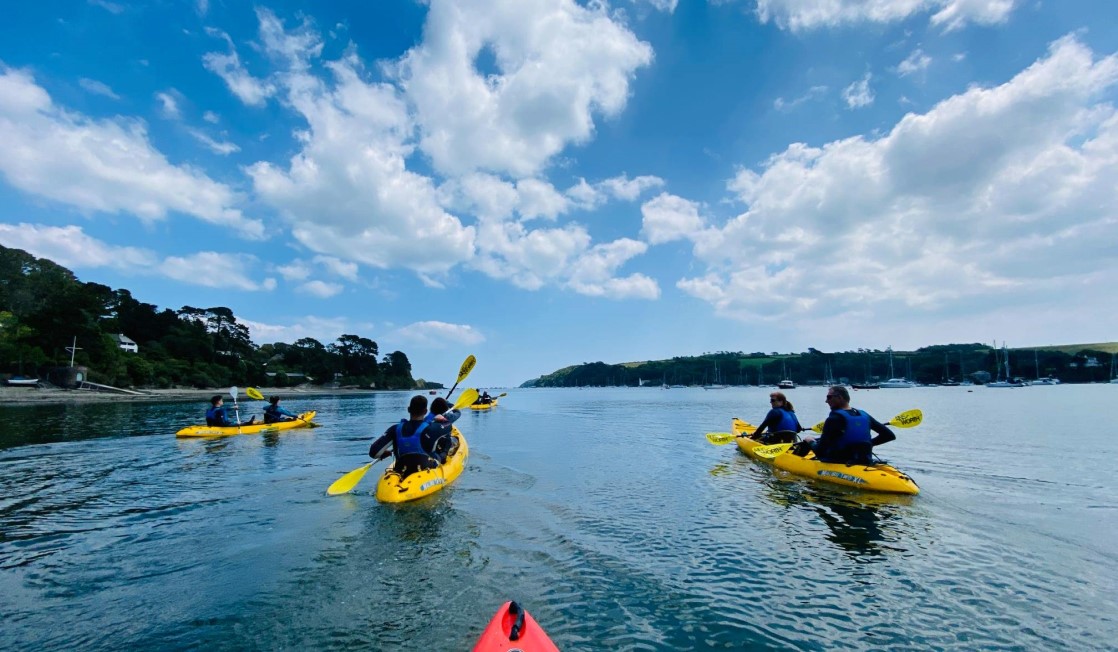 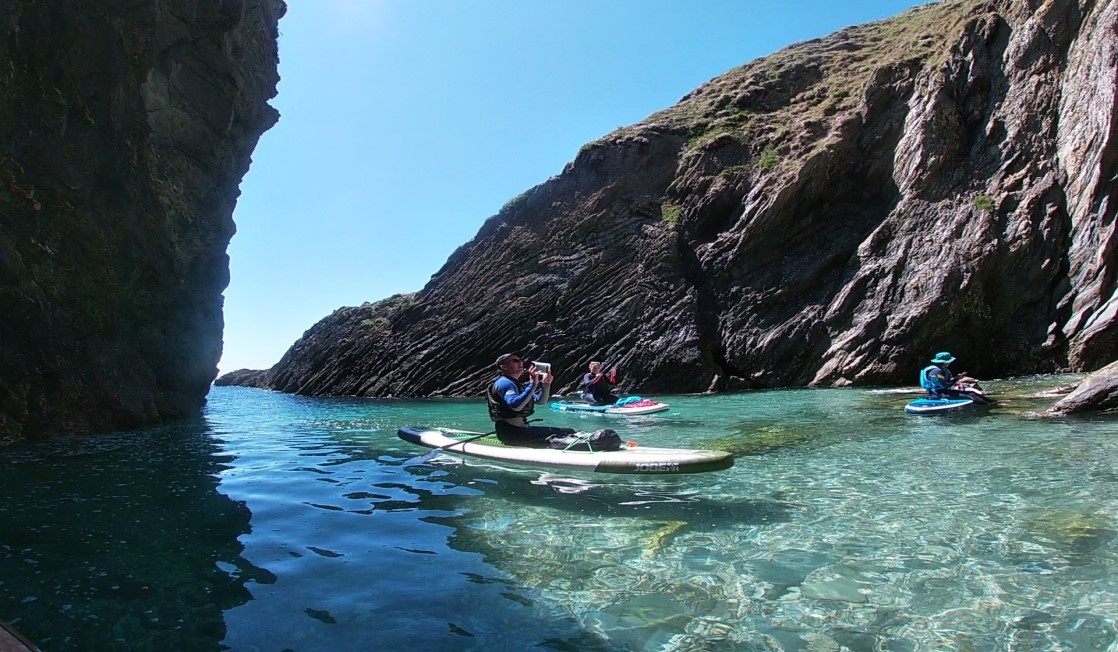 There is a thriving surf vibe at St Agnes, several surf shops and a high standard of surfing.

Known as the capital of ‘The Badlands’ (a term used during the 1980s-90s when visiting surfers would upset the locals by not adhering to etiquette and dropping in on their waves) the area between here and St Ives developed a tough reputation in the surfing world, one which is thankfully now much more positive.

There are surf schools here to try your hand: Breakers and Pure Blue Surf Academy for visitors and locals. Gwithians is also an attractive surf beach for beginners and not too far away.

Nearby Porthtowan also has a great surfing beach, hosting surfing competitions each summer. 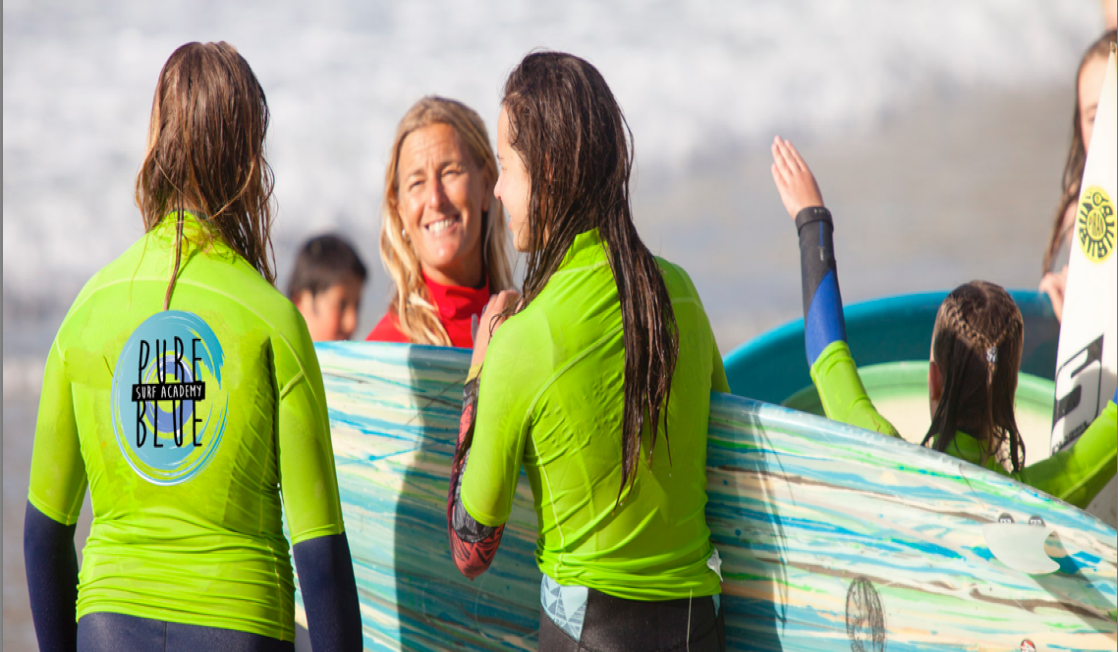 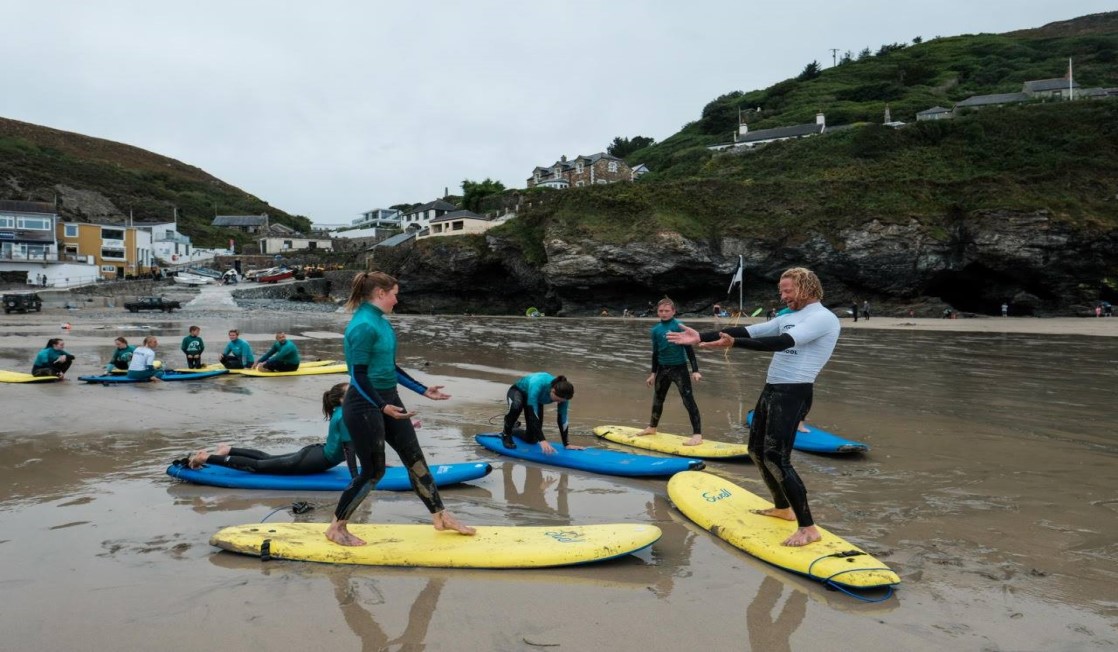 Local artist, Celia Creeper, has a studio in St Agnes where she paints scenes of Cornish harbours and local views using a variety of media.

Jo Polack is a contemporary textile artist, so for something truly unique and different, visit her studio.

Little Feathers Gallery is also well worth a visit. 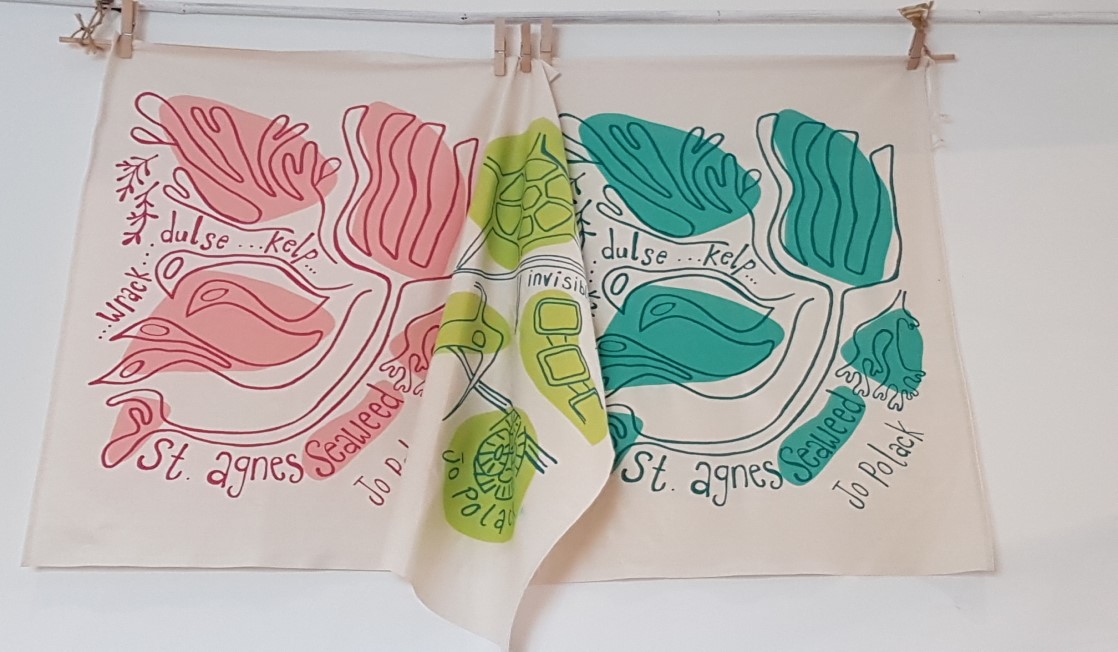 There is a shingle beach at Trevaunance Cove just below the town which reveals a sandy beach at low tide.

Trevaunance is popular with families and surfers; it is also perfect for children due to the gently shelving beach. When the tide is out, there is a small stream to splash around in and numerous rock pools to explore. If your canine companion is with you, please note that dogs are allowed all year round on leads.

The beach at Chapel Porth is similar but has a seasonal dog ban. The good news is that both beaches have lifeguards in attendance during the season. Trevellas Porth is not suitable for swimming but most of the television series, Poldark, was filmed around this area so it is quite interesting in terms of mining history – and dogs are welcome all year round.

Churchtown Arts is in one of the oldest listed buildings in St Agnes with an eclectic collection of items. Meanwhile, Finisterre may be nationally known but its heart is here in Cornwall, with headquarters here in St Agnes. As you’d expect there is also a surf shop, called Aggie. You can give back by shopping at the local RNLI shop, too. 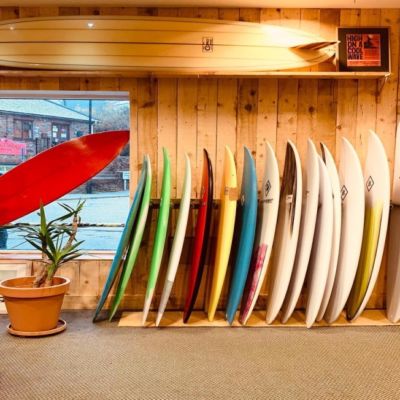 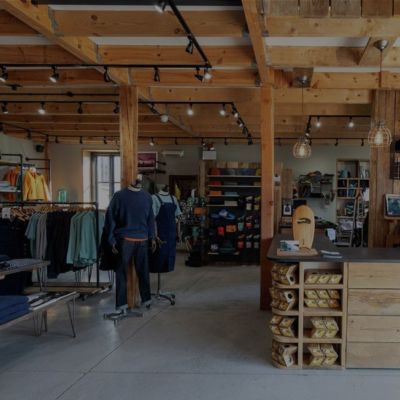 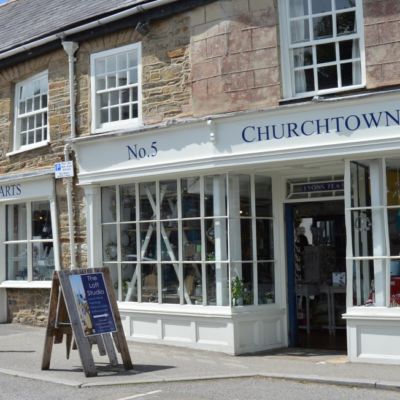 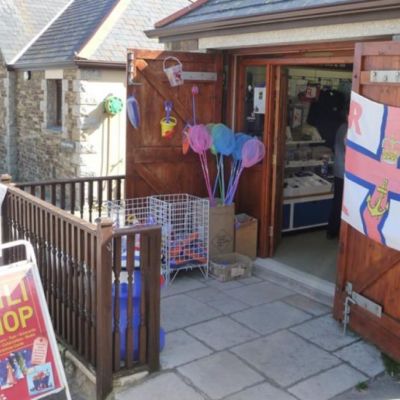 Mount Hawke at Porthtowan (about 4 miles away) is the South West’s biggest indoor skatepark with its 24,000 sq ft purpose built warehouse featuring sections suitable for all abilities. 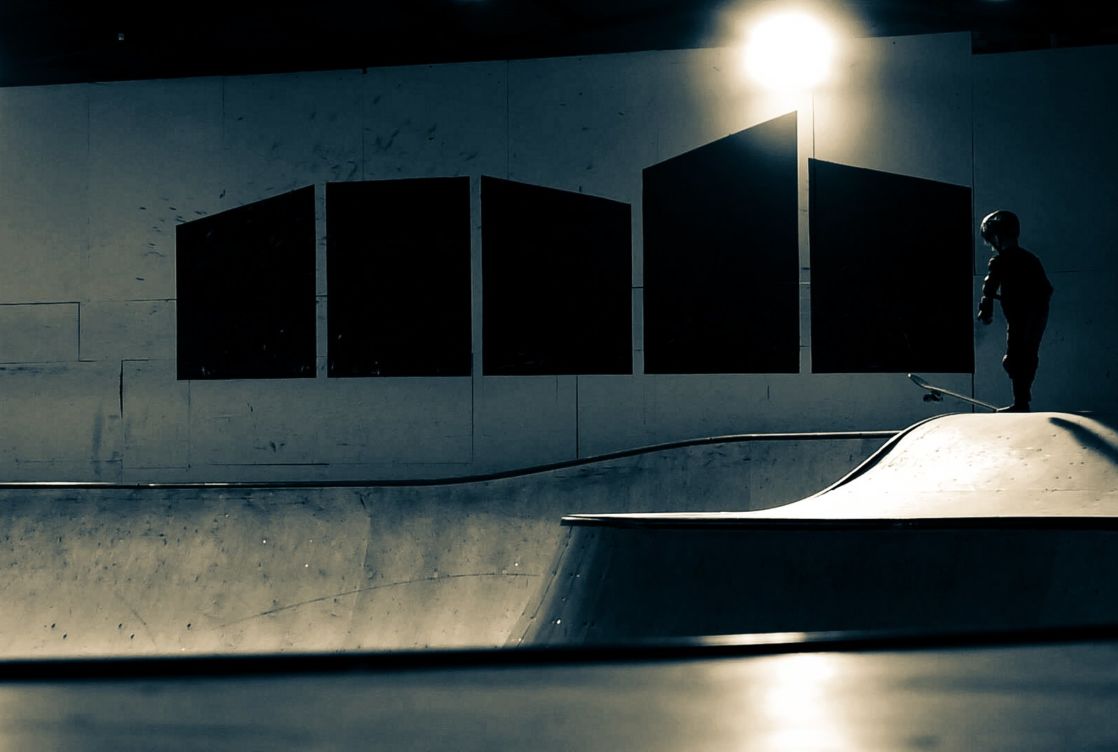 World class ramps and bowls for skateboard, BMX and scooters means an exciting time will be had by all. It’s a pretty amazing place.

The mine at Wheal Coates goes right down to the sea and, at high tide, the waves can be heard crashing against the rocks on the floor of the ruin, which is pretty atmospheric.

The mine shaft itself is accessible to a large cave at low tide on Chapel Porth Beach.

Of course, Wheal Coates is said to be haunted by the ghost of the miners who died there.

The town is an ideal centre for walking holidays for those wishing to explore the splendid North Cornwall coastline. The cliffs, caves, and wildlife make it especially attractive to visitors, so look out for sunfish, porpoises, dolphins and even turtles, alongside the more common seals and sea birds.

It is possible to follow the mining trail beginning at the famous Wheal Coates Tin Mine on the cliffs near Chapel Porth and continuing along the coastal path to the old workings at Pulborough and Wheal Kitty. The trail ends at Blue Hills, at the last remaining tin production centre in Cornwall.

Make sure you walk up to St Agnes Beacon which is 628 feet high. Survey the world, for from here it is said that you can see 23 miles of coast and 32 church towers.

There is a challenging 6 mile circular walk taking in St Agnes Beacon, St Agnes Head and the Iconic Wheal Coates engine house if you park at a Trevaunance Cove or Chapel Porth.

St Agnes was a centre of the tin and copper mining industries, so many of the old engine houses can be seen around this area.

Visit the Town Church to see its unusual ‘poor box’. One sight not to be missed is the aforementioned famous row of ‘Stippy Stappy’ (Cornish dialect) sea captains’ cottages and there is also a free museum on the edge of town on the road to Truro. There is also, of course, a unique May Day weekend Bolster Festival. Yes, it celebrates the defeat of the infamous giant!

The best time to visit St Agnes for warm weather is July-early September. Summers can be cool and a little windy on exposed coasts. February is normally the coldest month. Cloud and rain is variable but January is thought to be the wettest month.

Public toilets are at Porthtowan and Trevaunance cove (accessible). There are further toilets at Churchtown.